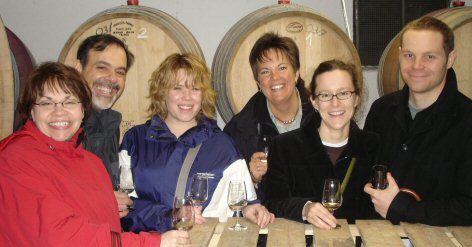 Markus took us into his family's vineyard, first owned by his Grandpa. He started studying to be a wine producer, cellar-meister, ten years ago. Now he runs his family's winery and another larger one nearby. Our campus team was on an outing, and he talked to us about how they prune each vine, leaving one branch growing. The vine itself looks ancient and somehow fragile, with a single branch about the thickness of a finger growing up through the steel lines that support the plant. Then Markus bent the branch down, and we could all hear it cracking as he wound it around the bottom most line. They do this to every plant, he explained. New shoots grow upward from the branch. If they didn't bend and break it, only a couple new shoots would grow. After it's been broken, the whole branch produces new shoots, thus more grapes.

Some of the vines had not one, but two shoots. We asked him why? If, when you're bending the branch down it breaks off, then you have another he explained. Markus attends one of the churches here in Kandern. He referred to John 15 where Jesus says, "I am the vine; you are the branches. Whoever abides in me and I in him, he it is that bears much fruit, for apart from me you can do nothing." Being in the vineyard and hearing Markus talk brought John 15 to life.

We saw the enormous steel wine press they use. He said the lower the pressure, the better, because it doesn't damage the skins and seeds, making the juice bitter. When you juice red grapes, the juice is white! So where does red wine come from? To make red wine they leave the skins in with the juice as they let it ferment. The red skins all rise to the top while the wine sits below. Then they pump the juice from below and put it back into the top of the tank so it mixes with the skins, giving it its color. It was fascinating.

Markus then took us into a room in the cellar filled with oak barrels. The oak was from France, the U.S., and Germany, medium 'toasted' wood. Their best wine ages in the barrel for two years, bringing out the heavy flavors. In America they let producers put oak chips into a steel barrel and they get their oak flavor much quicker, but it's not allowed in Europe, Markus says. He then showed us some ice wine. It must be precisely -9 degrees in the field when it's harvested, and -7 degrees at the press. When the conditions are just right they start early, three in the morning, working with flood lights to bring in the grapes. Since they're frozen, the juice is much more concentrated and has a higher sugar level. You never know if you'll get iced wine, it's always a gamble. Elsewhere the grapes are harvested then placed in a freezer at a controlled temperature. But that's illegal in Europe. It's unspoiled by progress, as some would say. We can learn a lot about the mindset of a culture observing and asking questions, and also about our own culture!