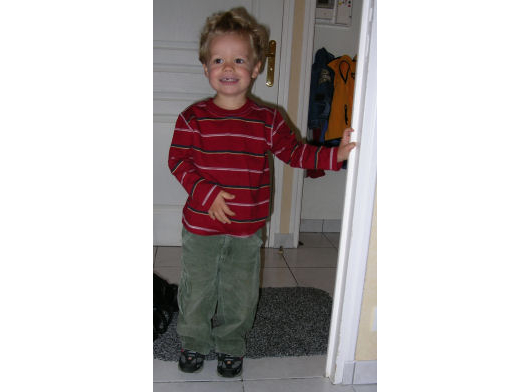 "Mommy, help!" Every parent knows what it's like to rush to their child in the middle of the night. Efrem was still asleep, eyes closed, sitting up in bed. What was wrong?

The day we got back to France we did a final walkthrough of our apartment. Talking with the owner in the parking lot, Silas and Efrem were playing rough. Suddenly Efrem was flat on the ground, blood in his mouth. His one remaining front tooth and the tooth next to it were loose, bleeding. His gums became bruised a dark purple. Efrem has already lost one of his front teeth. Losing the last one would be tough, since his adult teeth won't come for another three or four years. Staggering from jet lag, May took him to the doctor that night. Still concerned, I took him to the dentist the next day. There was nothing to do. Only time will tell if he loses it. Sometimes it takes a month or two for the root to die, or it could recover. A major difficulty - Efrem sucking his thumb.

We still had some of the "icky fingernail polish" we used to help Silas stop sucking his thumb. After Efrem was asleep, we put some on his thumb nail to make sure he wouldn't revert back to it. That's when we heard his cry, "Mommy, help!" He had his first taste of the icky polish. He was calling out for help from the same person who'd applied it.

That funny situation made me think about my own prayer life. How limited my perspective is. How immature my prayers are to God. All I want is deliverance from my present struggles, but God can see the ripened fruit at the end. I writhe and whine while God patiently tries to remove a sliver or simply keep me from hurting myself. He sees the healthy, holy person I am to become. May I break out of my self-centeredness long enough to get a glimpse too!