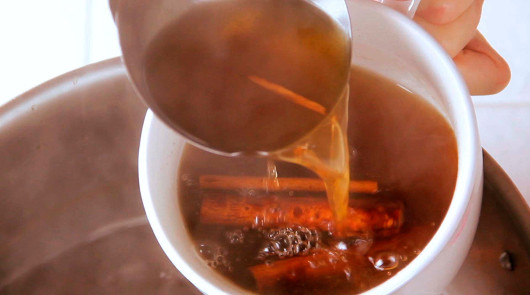 The word "goûter" (goo-tay) in French is loaded with meaning. It's to taste or try, but is also an afternoon snack corresponding with the time kids get out of school. Now, if you want to invite someone over in France, but don't want to commit to the standard four or five hour commitment a dinner holds, a goûter is a good option. So that's what we did, we invited all 14 households in our apartment to enjoy a goûter, American style. We served hot apple cider, served celery sticks filled with peanut butter and cream cheese, pumpkin bars, and chocolate oat bars. Guess what, they loved it! There were 8 households who came, that's 15 adults and 7 kids.

The first people rang the doorbell twenty minutes after the official starting time. We weren't expecting anyone to arrive at four. And most everyone who poured through the door brought gifts, bouquets of flowers, chocolates, homemade jam. The boys are stocked up with chocolate until spring. We told people that our party would have Thanksgiving as a theme, so we shared a little about Thanksgiving, its origins and particularities. I served everyone hot cider, which was fairly novel to them, which is funny considering we're in the apple region of France. Then everyone stood around the table, the food all aligned perfectly on the plates. We remembered that it's important to serve people here, so even though we tried the "serve yourselves" bit, we still had to pass the plates around all night, which people gladly took once the food got close enough to them. I practically had to dare people to try the celery. And when I explained what was in the pumpkin bars they hesitated. They make pumpkin soup, but have a hard time imagining it in a cake. But once they got up the nerve to taste it, they were pleasantly surprised.

We stood around the table talking for a couple hours, passing the plates, reserving cider, pointing out where Montana is on a map, and trying to explain what we do here. The last is the biggest challenge, mostly because to use the word missionary would be frightening. Hopefully now they at least realize 1. We do speak French, 2. We are friendly and not horribly strange, and 3. We serve some great desserts. So if we do this next year, hopefully they'll come again loaded with chocolate for the boys!