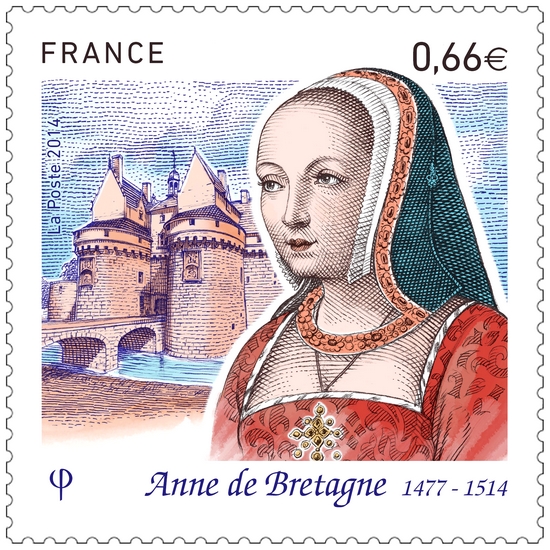 I've had a few occasions to give friends a 'tour' of Rennes.  What makes a place interesting for me isn't just the history, but the stories of the people behind them.  When I give a tour of Rennes I talk about the Knight du Guesclin , Mayor Leperdit who opposed the brutal Jean-Baptiste Carrier during the Revolution, but the central character in Brittany and Rennes story is Anne de Bretagne.  Here is her story:

Brittany finally yielded to France in 1532, after 600+ years of fighting for their independance.  The pivotal character in this story is an 11 year old girl named Anne.  Described as small and thin, charming and rosy cheeked.  One of Anne's legs was shorter than the other, causing a limp. To fix the problem, she wore a higher heel on that leg.  In her time, Anne was the richest woman in Europe.

Her dad was named Francis II, the last Duke of Brittany.  Unfortunately for Anne, Francis lost a war with France and was forced to sign a treaty (Treaty of Verger) saying his daughters couldn’t marry without the consent of the King of France.  About a year later Francis dies after falling from his horse during a leisurely ride.  So Anne becomes the Duchesse of Brittany, at the age of 11.

Two years later Anne tried to insure Brittany’s independence with her first marriage, to Maximilian of Austria, a rival of France.  Since Maximilian was a busy guy (he was “King of the Romans” at the time), he couldn’t make it to his wedding, having someone stand in for him instead!

This marriage, which violated the treaty of Verger did not sit well with France.  Charles VIII, then king of France asked for Anne’s hand in marriage.  When she said no, he laid siege to Rennes.  With little help from her allies, Rennes fell and Anne was engaged to Charles VIII at the Jacobins in RenStatue of Duchesse Anne in Nantesnes, becoming the queen of France.  In spite of Austria’s protest, her marriage with Maximilian was annulled.  Ironically, King Charles had been legally engaged to Maximilian’s daughter.

In six years of marriage to Charles, (from 14 to 21) Anne had four children three boys and a girl (seven total pregnancies).  All of whom died when they were quite young.  Their first boy died at 3, the rest lived a few weeks or less.  King Charles died after he hit his head passing through a stone doorway, leaving her a widow and childless, by law only able to marry the next king of France, Louis XII.

Anne created a prayer book for her first son, Charles Orlando.  The book reflects Anne's personal ideas. To live in faith was a great aspiration of hers.  She obviously wished to pass on this philosophy to her son, the future King of France, as the sequence of prayers in this manuscript was conceived as a spiritual and moral aid.  Sadly, he died of the measles when he was three years old.

Not wanting to be tied to France, Anne made a gamble.  She said she would marry Louis XII only if his current marriage would be annulled within a year.  She lost, and in what was described as the seamiest lawsuit of the age he had it annulled.

And so, Anne married a third time (at 22).  By Louis Anne had two girls, Claude and Renée (+ two who didn’t survive).  In total, she had 11 children.  Only two of them made it to adulthood.

Still, Anne wanted Brittany to be independent.  She planned to have her daughter Claude, the heir to Brittany, married to Charles of Luxembourg.  But Louis insisted Claude marry the next heir to the French throne Francis (I) of Angouleme.  Anne refused to approve the marriage and in her will insisted that either Claude marry Charles of Luxembourg or that Brittany be inherited by her other daughter Renée.  This was all ignored by the king, who had Claude marry Francis a year after Anne’s death.  The Duchesse Anne died during a particularly hard winter in 1514 of a “gravel attack”.  She was 36.  Anne’s daughter finally ceded Brittany to France, which was made official in 1532 with the Edict of Union of Brittany and France, which is ratified by the parliament in Vannes.

Hotel de Ville, RennesThe nave of the Hotel de Ville is empty today.  A statue of Louis XV was destroyed during the revolution.  In 1911 and new statue was unveiled, with Anne of Brittany kneeling before Charles XIII.  This statue was destroyed by Brittany separatists in August of 1932 (on 400th anniversary of the Edict).  They rode a fishing boat on the Vilaine just in front of the place de la mairie, planted and lit their explosives, returned to their boat and continued their fishing.  No one ever caught them.  The statue was destroyed, never to be replaced.