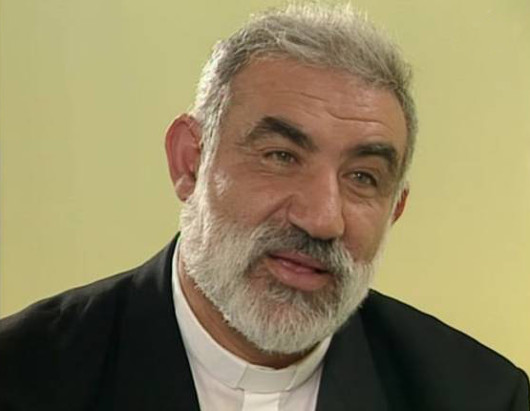 Have you ever puzzled over the perpetual conflict in the Middle East? Why is peace so impossible there? What practical steps can be taken toward peace?

Last night I attended a talk given by Emile Shoufani. He lives in Nazareth and is a voice for peace. He is an Arab and Palestinian, but also Israeli and an orthodox priest. For more than twenty years he directed St. Joseph’s school, with about 1300 students. The prejudice, mistrust, stereotypes, everything that fuels the Middle East conflict feed into his school.  Every time an event happens that could cause unrest, which is often, he has to calm the students and encourage patience and understanding, not revenge.

This goes deep into his roots.

He was born in Nazareth, and in 1948 when his village was claimed by Israel the soldiers rounded up 17 young men and shot them in the public square. One of them was his uncle. His family fled, heading north toward Lebanon. Three miles up the road his grandfather too was shot and killed. His grandmother found herself with five children to take care of. With no help at the border they eventually had to turn back. It took months. When they finally returned his grandmother insisted that she was for the living, not the dead, for her five remaining children, not the memory of those who died. She refused to attend the funerals or even have her husband’s body brought back to their family tomb. She also refused to allow anger, hatred or vengeance in her house. In short, with God’s help she forgave them.

Shoufani’s family was Christian. He said that everyone in his village was Christian. He went on to say that many Arabs are Christian, and that their Christian roots go back centuries before Islam. Bedouins, Coptic Egyptians, entire tribes of Arab people became Christian in the third century. That’s more than three hundred years before Muhammed. How often do we prejudge and stereotype Arab people as muslim when for some, their Christian roots go back even further than ours?

I’m just getting a glimpse of how very complicated this situation is. Israel is not just Jewish people, but Arabs and Palestinians, Jews, Muslims and Christians. And the conflict is all about land that these different groups consider sacred and hold claim to. Somehow between Israel and Palestinians they can’t even find it in themselves to accept the right for the other to exist.  Amidst this Shoufani has arranged for Jewish and Arab students to spend a couple days with a family from the other culture. This is for personal contact and tearing down prejudice and stereotypes. He was recently involved in another initiative to bring a large group of Jewish and Arab people to Auschwitz. Why? Arabs had nothing to do with the holocaust, “Christians” were behind it. They were opening themselves up, trying to better understand their Jewish neighbors, entering into and acknowledging their suffering. And this was done with no strings attached. Seek to understand, open the dialogue. Those from both cultures who participated in this trip have more common ground for discussion.

Can we drop our stereotypes and seek to understand our Muslim neighbors? Are we willing to enter into the suffering of Muslims? Does God care less for the Sunni Muslims massacred in sectarian violence than the Christians killed in their church in Baghdad? We fight not against flesh and blood, but against spiritual forces. Human beings everywhere are victims of this deadly spiritual battle. It’s all very, very sad and unjust. I think the solution is spiritual, and Christ offers the only true model for peace.