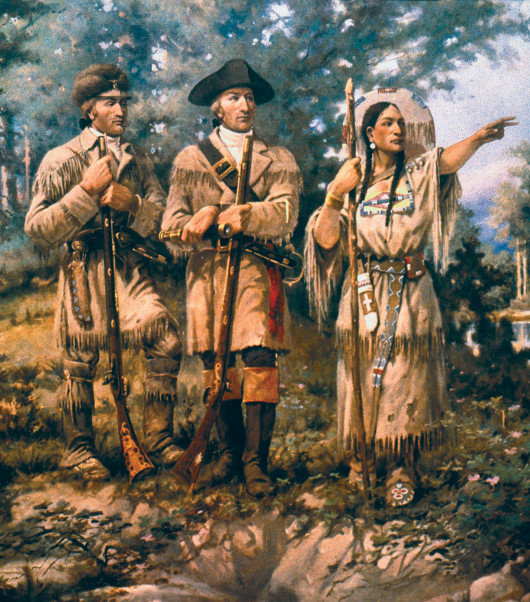 Our campus team is studying Hebrews together. The men’s group and our student leaders are studying 2 Corinthians. I love digging back into the Word together with others. But right now I’m also plowing through Undaunted Courage by Steven Ambrose, about the Lewis and Clark expedition. Like most every Jr. High student in Montana, we spent months and months studying Lewis and Clark, their explorations and discoveries. I remember drawing maps that showed their different treks across Montana. I might have thought their main goal was to explore Montana rather than find a route to the Pacific.

Today I read an account of them hunting a grizzly bear. Six of them were able to approach and surprise it. The bear absorbed four bullets, got pretty upset and ran after them in a roar. Two additional shots were fired, one of which broke its shoulder. This hardly hindered his progress toward them. They then did the only sensible thing when armed with a muzzle loading rifle that’s been spent – RUN! Some of them took off in a canoe. A few others thought they’d keep firing at it from a willow grove, which only revealed their hiding place. They then abandoned their gear and jumped off a 20 ft. cliff into the river. The bear, speaking of undaunted courage, dove into the river after them. It had almost reached one of the swimmers when a soldier on the bank finally shot it in the head. Lewis wrote something similar after every encounter with a grizzly, “these bear being so hard to die rather intimidates us all.” This translated from early 19th century English means – why do we keep shooting at these things?!

It’s a book about the adventurous, exploring spirit and certainly undaunted courage. I think about the adventure before us as we hope to see the Lord work in the lives of French students. The expedition took years longer than planned. I need that kind of patience and perseverance. They had a clearly defined purpose, and so do we – living and sharing the gospel with students here in Rennes. They had a great team: two captains who were decisive leaders, brave men like John Colter, and perhaps the most valuable of all, a sixteen year old Indian squaw named Sacagawea. She kept her wits about her and saved equipment and journals that had fallen out of their boat after her husband nearly capsized it.  Sacagawea knew how to find roots and food to supplement their all meat diet, and her presence told the Indians encountered that theirs wasn’t a war party. Our campus team is also a great combination of networkers, communicators and artists who all share a heart for Jesus and the French. We’re all in this adventure together.

But there are grizzly bears. One fear we have is that we won’t be able to break through the indifference that shrouds the hearts of most French students. How many times will they need to hear the gospel before they will be overcome with Christ’s love? We continue to take initiative with undaunted courage, because God has called us here to do just that. But what effect will our prayers, words and actions have? Time will tell, and one day from heaven we will clearly see.