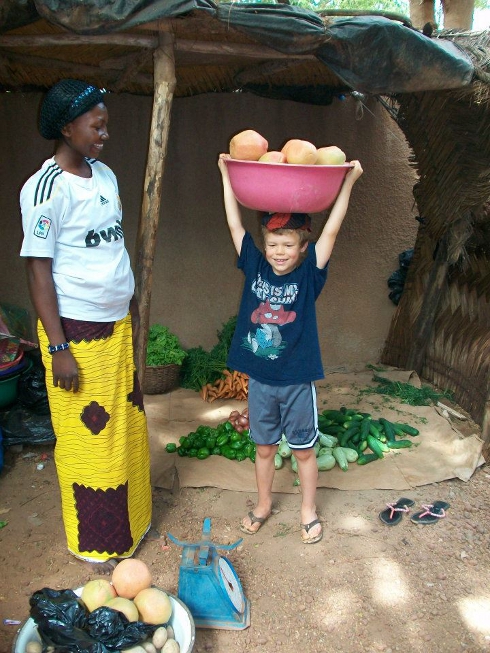 Ouagadougou is pronounced – wa ga doo goo, a really fun name to say and the capital of Burkina Faso. The last week of October, which was the All Saints holiday in France, we went to this West African country with a team of 13. Only five of us were Campus Crusade staff members.

I have a notorious fear of the unknown which God has been slowly working on through the years. On the plane flying over an ocean of desert I was anxious. Anxious about how different the culture would be, potential illnesses, malaria carrying mosquitoes, the inevitable heat… There was so much I didn’t know.

We were told to hold on to our luggage as we left the airport, because there are usually people who will try to carry them for you hoping to get some change in return. We warned Silas and Efrem to hold on to their bags and stay close to us.

As we approached the door a host of students all wearing white polo shirts with a “Campus pour Christ” logo start taking everyone’s luggage. We promptly told the boys to go ahead as we blindly handed everything we were carrying over to these smiling strangers. More smiles and hand shakes followed. Our luggage was heaped into a pile behind a little Toyota truck. Then, just to be safe, three students sat on top of the mountain of luggage. Our team climbed into a large white van, Efrem on my lap. A pile of white people, we made a spectacle that everyone noticed. It was dark, because in Africa the sun comes up at 6am every day and sets at 6pm every day. There is no daylight savings time or variance. They drove us to the complex where we stayed – SIM, which stands for Serving In Mission. Most of the team was crammed into bunks while the Workman family was in a two bedroom apartment. We would get used to turning on ceiling fans and tucking mosquito nets around our mattresses.

Efrem’s first journal entry: When we arrived IT WAS SO HOT!!!! And indeed it was, highs near 100 and lows, well not low enough. At night we would wash pants or t-shirts, give them a light wring, and in the morning they would be dry. I noted one morning, “I drank four glasses of water, one glass of milk, a cup of coffee and a .75 liter bottle of water.” It seems your sweat can take priority over your bladder in some heat, so we were constantly reminding the boys to drink. The dust didn’t help. Every window and door is screened and open, and the air is dusty. At dusk and dawn there is a red haze. The ceiling fans just blew the dust around. Dishes had to be dried and put into cupboards so they wouldn’t just get dirty again. My nose was constantly dry and my throat parched. But it’s not really the heat that made the biggest impression, but warmth of another kind.

People, some of the kindest people you’ve ever met, that is the richness of Africa. From the moment we arrived to the moment we went back through security, our African friends were with us. They never ceased to express their thankfulness that we came. We were bowled over by their warmth. “How are you?” they would ask. “Did you sleep okay? How is your energy level?” They knew that we would be wiped out by the heat, and they were very attentive. Whenever we asked for anything their response would be, “Il n’y a pas de problème" – there’s no problem. I say that all the time now. I love it. There are six staff couples with Campus Crusade in Burkina Faso. We came at the most difficult time for them. One family had a child just three days before. Another family had a baby during our stay (they named her Melissa, after the Melissa on our team whose family once lived there and organized our trip!). And the national campus director was gone much of the week for a training conference. But they never complained or showed even the slightest annoyance. People come first. We were spoiled.

As we rode in the van or walked down the streets we would see children pointing and hear people saying “nasara,” which means white foreigner in the local language of moré. “What’s a nasara?” Efrem once asked. We answered him, “you.” Kids would start chanting or singing nasara bonjour, nasara bonjour… It’s a different feeling to be in the minority.

We had four main excursions on campus, and a group of students showed up every day to accompany us nasara. We would simply knock on dorm room doors and simply say that we wanted to share a brochure with them about God. They would welcome us, listen attentively, and often pray to receive Christ as their savior. On a return trip to one dorm there were a number of conversations that were hijacked by muslims asking questions. It was clear we had entered into the spiritual battle for Africa. The national director explained that there is a spiritual battle for Africa. The Muslim countries of the north are trying to advance southward, where the more Christian countries in the south are trying to halt this advance and even push it back. This is primarily taking place in the Sahara belt, which is where Burkina Faso lies. This defines their strategy up to 2020. Silas noted in his journal how surprised he was to see Muslims praying on the side of the street, kneeling on mats. But the students in Burkina Faso are very open, willing to listen, most believe in God, and over 40 prayed to receive Christ in the course of our stay. God is working!

One evening we drove to the outskirts of Ouagadougou. The structures became sparse and more hobbled together. Many were made of mud brick, which doesn’t have a significant life span. We reached a new ‘neighborhood’ which didn’t have electricity yet, passing through a gate into a churchyard where we would show the Jesus Film. Little children would run up to us, their right arms outstretched wanting to shake our hands. Even the little ones bundled in the small of their mother’s back were reaching out to shake hands with these nasara. The loudspeaker going and lights shining around the frame of the screen, people came flocking from all around to see the spectacle. There was cheering when Jesus raised a girl from the dead or made the blind man see. Silas and Efrem were seated on benches surrounded by little children. The children would sometimes turn from the film and stare at these little nasara. One touched Silas’ hair, remarking that it is so soft. Just as the cross was being lifted into place the film was paused and a brief salvation message was given. A crowd of people responded to the invitation.

Silas and Efrem also hosted a party for the children of the staff families. They tossed water balloons, kicked a soccer ball around, played with a cornstarch and water solution, read the story of Jesus walking on water, and offered to the children a wooden top. It was so much fun, and a true highlight of the project. Some kids didn’t want to go home, frowning as they rode behind their mother on a scooter. And I can understand the feeling. As we said goodbye to our African friends at the airport, it was sad to leave them. Even though cooler weather, clean tap water, and the many other comforts of home were calling, it was tough to leave our new friends. Please join with us in praying for them, for the ministry in Burkina Faso, for Lazare, Nébié, Ganou, Josué, Augustin, Pierre and their families. Please pray for the people who have made decisions to follow Christ, that they will grow in their faith. And pray for those who are simply waiting for a clear explanation of the gospel…