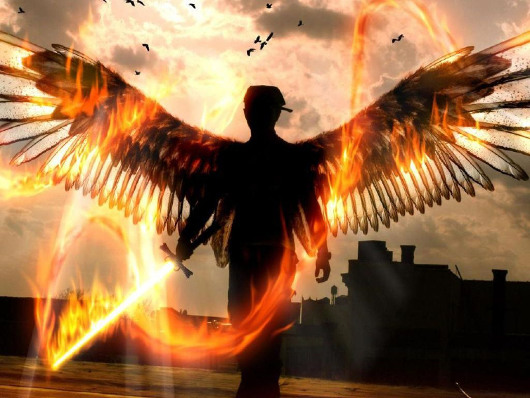 Sometimes what we don’t say is more powerful than our words.

What would it be like to see an angel? Not a secret agent acting in disguise, the kind we’re not meant to notice, but imagine an angel shining with brilliant light, its wings spread, sword drawn, and eyes piercing with spiritual perspective. Our normal humdrum is suddenly burst into with something completely otherworldly and foreign and amazing. It is hard to imagine, and what we might think or feel is even harder.

Several instances are recorded where humans have come face to face with an angels. When Gabriel appears to Mary his first words are – fear not! What does that say about what her initial reaction might have been? John in the midst of experiencing what he recorded in the book of revelation fell down at the feet of an angel to worship him. The angel was quick to react, “You must not do that! I am a fellow servant… Worship God.” John was so moved by the things being revealed to him and by the beings that were talking to him that he fell down to worship the angel not once, but twice. An angel from heaven knows he is not God! An angel from heaven also knows to worship only God.

So what about Jesus? What was his response to those worshiped him as God?

When Thomas was finally convinced, touching Jesus’ wounds he exclaimed, “My Lord and my God!” Jesus said nothing to stop this. He was thinking of all the people who would believe without seeing him.

The last time they saw him, the eleven remaining disciples went to a mountain where Jesus asked them to meet. They must have had a sense that something important was about to happen. Matthew writes, “When they saw Him, they worshiped Him; but some doubted.” Picture these eleven men bowing down before Jesus, worshiping him. How many minutes did this continue? What was the look on Jesus’ face? Did he close his eyes or look intently into each of their hearts? Did he shed some tears? One thing is certain - this moment of worship was unhindered. Jesus accepted their worship as merited.

But some doubted. Isn’t that a curious addition of Matthew’s? Thomas putting his finger into Jesus’ side wasn’t the end of doubt. Even as they all bowed and worshiped Jesus as God some of them doubted. Who? It doesn’t matter. Those eleven went on, empowered by the Holy Spirit, to launch the missionary age we live in. Who he is overshadows our doubt.

And you, today, do you sometimes have doubts? Are there questions that trouble you? Isn’t that okay? Take a moment to listen to the silence of Jesus. You just might see him for who he truly is. Isn’t that what is most important?