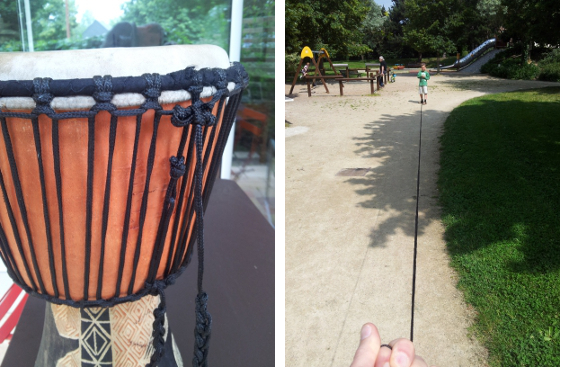 They showed up suddenly, a few perfectly round dart like holes. Traces of “sawdust” beneath the openings showed something was still at work in there. They were on one of the boys’ prized possessions, the djembe purchased during our trip to Burkina Faso. Whatever the little buggers were they had also eaten a couple holes through the precious skin over the drum. We had to do something!

It seemed to be a furniture beetle, the larva of which bore holes after they hatch. Researching online we found a number of possible solutions. Spraying or brushing certain chemicals was recommended, but how could we be sure we actually got them, and all of them? It was also mentioned that they can’t survive extreme heat. The djembe happened to just fit into our oven, so that’s what I opted for. First I removed the skin from the drum. Once that was off, into the oven the djembe went. Slowly I raised the temperature to over 200 degrees Fahrenheit. We let it bake in there for a few hours, to make sure the temperature was hot enough to get them. The smell of the heated wood reminded me of Burkina (:

After we were sure nothing could have survived, it was time to restring the djembe. Do you have any idea how long the chord is? LONG! I had taken pictures before dismantling it to make sure I could remember how to put it back together. The guy we purchased the drum from in Africa took the time to tighten it for us, showing us how it’s done. He took a thick stick, put it through the chord and turned it. Working his way around the drum, section by section, he re-tied it at the end. The edges of the drum gave even a higher pitch and the center a nice solid thump. I used the handle of a solid old hammer to tighten the chords, working my way around two or three times. It’s quite a work out!

When the end of school celebration arrived, and Efrem was to play his djembe while the class sang a song for the parents, everything was ready. Want to see the video of Efrem playing on stage? Here it is!