Confusion, that’s what living in another country creates.  When we type in English, we put two spaces after a period.  In France, they use just one.  BUT, they put a space before a question mark or exclamation point, maybe to make up for the other spaces they're missing.  Since I type emails in English and French, my fingers get easily confused and I find myself putting too many or not enough spaces as I type.  And it looks a little weird to have a space before the question mark, don’t you think ? Or does it?  Now the question mark right after looks a little close to me.  And sometimes I have a hard time finding words in English too, like there’s some French word that comes to mind and I really would rather use it because it fits just right.

Expressions can be funny too.  Cheese, for example, has a special place in French culture.  There is a board game where the players work their way around a large chunk of cheese, but at times they can take a short-cut across.  This is called “cutting the cheese.”  When an American says “cut the cheese” it means something entirely different.  I was with a French friend once and was surprised to hear him refer to a BMW car as a “BM.”  I warned him to make sure to add the W if he’s ever with a group of Americans, because having a BMW and having a BM are completely different experiences.

Then there are units.  I may never be able to rattle off my height or weight in kilos or centimeters.  It is embarrassing renting skis and having no idea what you weigh.  But I have to admit that my metric tape measure is a joy to use.  The other day I was down in the garage, needing to make a measurement, and all I had handy was my tape in inches.  My mind seized up when suddenly I had to think in fractions.  Ten is such a beautiful round number, why do we insist on working in twelves and threes?  Does it go back to the disciples?  The tribes of Israel?  Our gas prices don’t look that bad until you realize there are almost four liters in one gallon.

Finally there is the exchange rate.  The value of the Euro has fallen dramatically recently.  I’m happy that it has gotten lower, because that’s helpful to us.  What scares me a little is how quickly the change has come.  If it can fall that quickly, it could rise again that quickly.  Things seem so unstable.  For the time being, your gifts are going further.  And we thank God for your partnership with us!

1. Why do people (or you individually) not believe in God?

2. If you could ask God a question, what would it be?

After collecting the results – and it’s not often a French student thinks about these things – we compiled the top 5 questions/objections students have concerning God. These were:

These are all great questions. I hear them every week talking to students on campus. And Christians should honestly take the time to consider them, to remain relevant to the culture. I personally haven’t thought through them all in depth, but the one that intrigues me the most is the first. It has to do with the problem of evil, which I find terribly complicated.

The problem is, God is loving, just, all powerful, and ever present. Yet injustice, evil happens. These seem to be contradictory. Couldn’t – wouldn’t – shouldn’t a loving and all powerful God intervene before an earthquake hits Haiti or as a kidnapper moves to take a child or a murderer strikes? 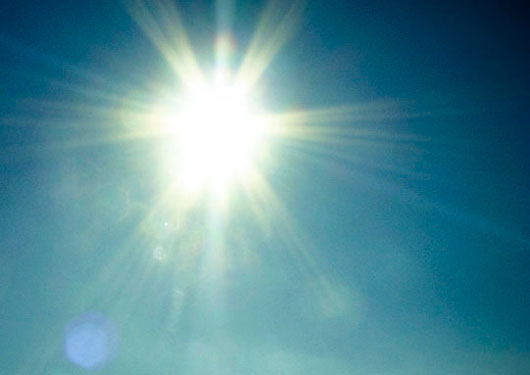 The wind was cool, but the sun was shining and it felt good.  I was on the science campus doing surveys with Tereza.  After being a little discouraged the last guy, Matthew, we talked to made everything worthwhile.  It started off pretty classic.  We asked why he thinks people don’t believe in God.  He said maybe because of disasters; maybe they think God isn’t taking care of us.  When asked if he believed in God, he was very honest.  He said you can’t prove that God doesn’t exist, just like you can’t prove that he does exist.  Because of that he said he was in between, undecided.  We then asked, if he could, what question he would ask God?  His question, “Are you proud of human beings?”  Interesting question.  Since he was a biology student we talked science a bit.  I asked him if he sees evidence of design in his studies.  I asked if they teach anything about entropy in biology, because the scientific fact that things in general go from order to disorder doesn’t correspond well with the concept of evolution.  He was really open, and we all enjoyed our discussion.  We invited him to the Dialogues Veritas, discussion debate we’re holding later this month.  He thanked us for the discussion, seeming to really enjoy it.  It was very encouraging.  Pray for Matthew, that we’ll see him at the our veritas event, that God will make him thirsty for truth. 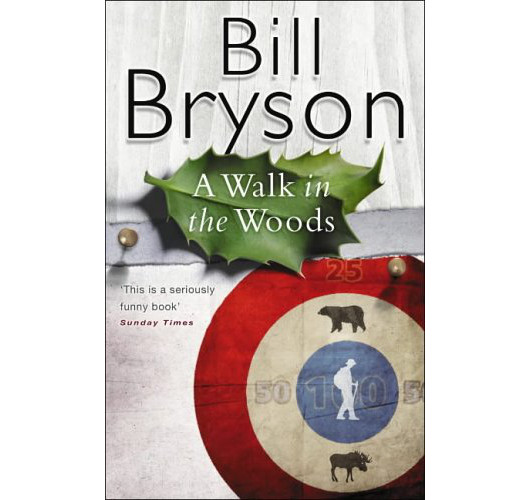 Our family is taking a week of vacation in the Pyrenees, doing some skiing.  Unfortunately I haven’t been able to join them, since I hurt my knee.  It is getting better, but the doctor said skiing would not be good.  So I find myself driving them to and from the mountain and preparing all the meals.  It’s not a bad deal, especially for them.  It’s given me a chance to do a little reading.

An author I really enjoy is Bill Bryson, so I went to the Franco-American Institute and checked out A Walk in the Woods.  Bryson tells stories with remarkable color and perspective, but he desperately needs the Lord.  In it he tells the story of hiking the Appalachian Trail with his friend Katz.  He and Katz hiked over one third of the trail one summer.  Towards the end they stay at a guesthouse and meet a young couple who have almost finished hiking the entire trail.  In their brief conversation, they mention their faith in Jesus.  Bryson clearly doesn’t esteem the two, saying of the girl that there was something serenely mindless in her manner.  His response to their transparent faith is to take a mental note to lock his door.

Immediately following this is a heart to heart conversation with his friend Katz out on the trail.  Katz is a recovered drug addict who after three years of being clean started drinking again.  In a vulnerable moment he says, “There’s just this kind of hole in my life where drinking used to be.”  The best Bryson can offer is a “stupidly affectionate jab on the shoulder.”  How ironic that just a day before they met two people who had purpose in life, a relationship with God who is the only one who can fill that gaping hole that drinking or any of our idols fake.

The young couple struck him as too weird, and maybe they were.  Christians often have a culture vastly different from the rest.  Of course, some things are good.  But I can’t help thinking of Jesus, able to live a perfectly sinless life while rubbing shoulders with prostitutes and sinners of the day.  Jesus had a magnetic quality.  Everywhere he went, people flocked to him, wanted to hear his words, drink from those streams of living water.  We are called to be Jesus to this world.  Are people attracted to us?  Are we fun to hang out with?  Do we struggle to relate?.. 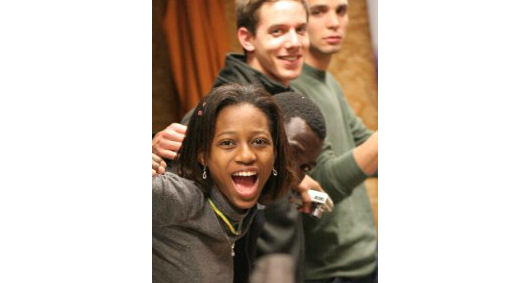 Don’t you just love a good story?  While we were at the New Year conference, Laurent, one of our young staff members sat down with the microphone to tell everyone an encouraging story about Sophie.

Sophie is a student in Rennes.  She spent a year studying in Canada and became involved with Campus Crusade.  Through this, she participated in the summer project in Paris last summer.

Sophie has a passion to share the love of Christ with others, and after the project she shared about Christ with her family.  Because God was at work and Sophie took the initiative, her mother and two of her sisters placed their faith in Christ and are now active in their church!

At this time in the story, Laurent asked Sophie to stand up, which was met by a great round of applause.  Then Laurent asked Eliezer to stand up to even more applause, because both Sophie and Eliezer came to the New Year conference!

Isn’t it exciting to see God working?!  What a great story.

It was a completely new experience for us, traipsing through the forest hunting for mushrooms.  Now, I’ve never been that big of fan of eating mushrooms, so I wouldn’t be opposed to using a .22 for the endeavor.  But, for the sake of my wife, who loves mushrooms, I used a knife.  Some colleagues and friends took us to a spot where they find lots of golden chanterelle, or girolle gris in French.  You should know that this is a really big deal.  There are lots of French who would NEVER disclose the whereabouts of their mushroom finds.  They take serious steps to keep their secret, even blindfolding those who might come with them.

At first I was tromping all over mushrooms, but eventually I gained an eye for them and went to work collecting.  The boys, meanwhile were running all over with their pocket knives open, sharpening sticks and whittling.  Luckily for them, their parents were doubled over, eyes focused on the ground.  In about an hour and a half we collected 750g of mushrooms.  If we were to buy that many at the store it would cost $30!

It gave me new eyes, and suddenly I’m seeing mushrooms everywhere, on the soccer field, in our yard, and even these beautiful red ones with white spots that are just fifty yards from our front door.  I haven’t touched them, but they’re amazing.  There’s a whole forest of them growing right by the path.  Once I saw a lady picking one, and when she saw me looking back at her she just said, “I know, I know.  But they’re just so pretty.”  Ah, la France…