May, 2015
click for printable pdf
UN
WINDOWS AND BEAUTIFUL STORIES
We get fleeting windows into other people's lives, a photo on Facebook, an email, a short conversation. Those windows might be fascinating or banal. When Amelia opened her window and sent me an email, I was deeply moved. She is 30 years old and severely handicapped. For the longest time she thought that if God exists things would have to be different. Someone once told her God must be punishing some sin her parents committed, and though there were friends telling her about a loving God, she was stuck on one who punishes. A few months ago everything changed, her father passed away, the last thing she had to hold onto. Looking for anything to take her away from her suffering she found the site questions2vie.com. She says it immediately spoke to her. She prayed to receive Christ and the Holy Spirit and felt "joy and peace beyond description." With God's help she has forgiven people who hurt her. And rereading her Bible the Holy Spirit is enlightening passages she never understood before. She says she has abandoned her life to God. "An extraordinary force lives within me and I have this feeling of purity and incredible light." Now she understands God's love, not one who punishes but has her well being at heart. Amelia signed up to receive the Skip the Stress email series, which is why she responded to me and shared her beautiful story. Through that brief window we can see God's glory.
DEUX
PUT ME IN COACH
Both Silas' and Efrem's baseball teams participated in a baseball tournament in a neighboring town last weekend. It lasted two days and visiting teams set up tents and camped. The biggest challenge was pitching, with strict pitch limits every team was stretched. In the one game of Silas' that I was able to watch, he pitched over two innings (his coach has never even practiced with him at pitcher). Guess what? He did great! Only giving up one walk, he was their most accurate pitcher. At the plate Silas had 5 RBIs in 7 at bats. Efrem had the most RBIs for his team, with 4. The weekend was tiring, but a great experience.

Camping in the outfield at the tournament.
Praises...
Please pray... 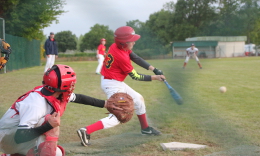 Silas punching the ball opposite field (he did hit it). 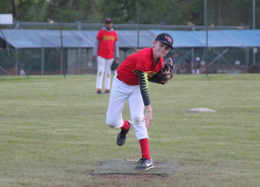 Silas takes the mound for the Rennes Redwings.